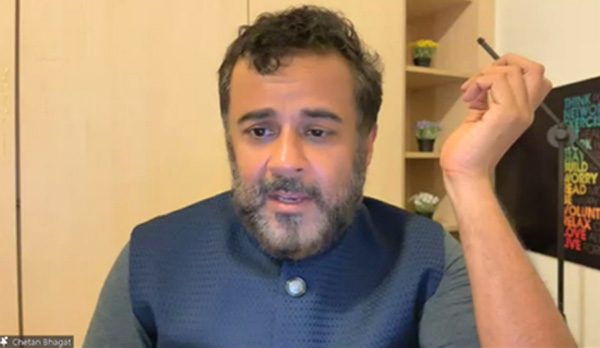 Alliance University launched its School of Liberal Arts on Friday, February 18, 2022, in an online event graced by Chetan Bhagat, the celebrated Indian writer. Various stakeholders of the university including students, parents, alumni, and corporates, participated in the launch in larger numbers. The event was an authentic introduction to the philosophy of Liberal Arts where there was a meeting ground between the academic and popular perspectives.

The guest of honor, Chetan Bhagat emphasized the need for a liberal art turn in the Indian higher education scene. Liberal arts, he said, was best placed to bridge the widening divide between the two cultures of art and science. Bhagat spoke about how liberal arts influenced his own evolution as a writer. He emphasized the need to democratize liberal arts education so that it reaches the masses. Stressing on the virtues of simplicity in communication, he also admitted the complexity of knowledge that liberal arts expose one to. Bhagat also addressed various audience questions regarding career choice, the writing profession, and decreasing attention-span of the current generation.

The Vice-Chancellor, Dr. Anubha Singh marked out transdisciplinarity as the unique feature of the liberal arts program at Alliance University. Given the complexity of 21st century challenges like climate change, she spoke about the need for a reinvention of pedagogy that goes beyond mere interdisciplinarity. She also provided an inspiring litany of corporate bigwigs who made the best of their liberal arts background. This was meant to underline the pragmatic utility brought about by the liberal arts perspective apart from the inherent development of the higher cognitive faculties that the liberal arts facilitate.

The Pro-Chancellor, Mr. Abhay Chebbi formally launched the programme and highlighted the growth trajectory of an institution that began 25 years ago as a pioneer in management education; to becoming the first private university in Karnataka; and now embarking on launching a school for liberal education – heralding that the uniqueness in Alliance Education lies in holistic transformation.

He congratulated the academic team members and mentioned that liberal education at Alliance will focus on one singular philosophy – students will be taught how to think and not what to think – and that Alliance University will become a preferred destination for all stakeholders with a focus on three key elements – Enhanced diversity; Strong foundation in Indian culture, heritage & ethos; and Transdisciplinary learning.

The launch was succeeded by the screening of an in-house short film directed by Dr. Subrata Dey. The film showcased the transdisciplinary connection of dots enabled by the liberal arts ethos through a riveting narrative of discovery and learning.

The interim Associate Dean of the School, Dr. Anirudh Sridhar introduced the unique features of the programme and gave a brief glimpse of the vibrant conversations possible between the domains of art and science. Using the example of colour, he showed how the disciplines of science, art, and literature illuminate different aspects of the very idea of colour.

The school offers a one-of-a-kind undergraduate programme with the freedom for the students to choose subjects and design their degrees with majors and minors of their interest. This is the defining ethos of the programme that is captured in the maxim: “freedom to excel”. Along with the undergraduate programme, the university is also offering a one-of-a-kind postgraduate fellowship programme called the “Global Leaders’ Alliance” (GLA) fellowship. The fellowship programme aims to train and mould young thinkers with the potential for excellence to address the unique and multifaceted challenges of the twenty-first century. The taught phase of the fellowship will be offered by a stellar group of foreign faculty members from top-rated universities from across the globe including Oxford, Cambridge, and Harvard.

The undergraduate majors offered by the school of liberal arts include English, Media Studies, Cultural Studies, Public Policy, Economics, Data Science, and Applied Mathematics. Students who enter the programme will also study a broad set of foundation courses, which would help them develop their fundamental skills in critical thinking, research, and ethics. They will also have the option of studying a foreign language of their choice. The students will have the privilege of attending classes led by international faculty. These students will also have an inside track into the GLA fellowship programme at the end of their undergraduate studies.