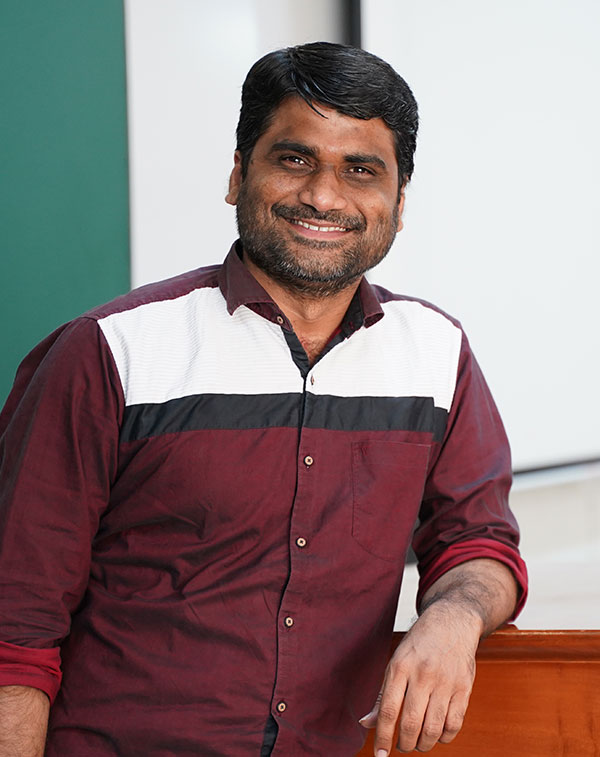 Dr. Harinath Aireddy completed his doctoral degree in Instrumentation & Device Fabrication from IIT Kharagpur, and his M.Tech. in Advanced Materials from NIT Rourkela. He is an Assistant Professor and an active scientist in the Department of Electronics and Communication Engineering.

He bagged a major research project titled “Studies on selective laser melting of aluminium alloys for rapid prototyping of RF modules” from the reputed Department of Science and Technology (DST)-Science and Engineering Research Board (SERB) Government of India, under TARE. Moreover, his patent filed invention titled “Portable Isolation Apparatus with Ultraviolet Disinfection” has been published in prestigious World Intellectual Property Organization, United Nations.

Through a serious of investigations, he has developed Cantilever Beam Magnetometer (CBM) for electric field induced magnetic measurements, which is the first of its kind in the world. He has also developed an ultra-low-vibration Liquid Nitrogen (LN2) flow cryostat for low temperature measurements in optical cantilever beam magnetometer set-up, which is also the first of its kind in the world. Further, Dr. Aireddy also developed a double cantilever beam set-up for simultaneous magnetostriction measurements of two different or same type of samples for sensor/actuator applications. He has also been one of the researchers in the world to fabricate and investigate semiconductor-based spin diodes and spin transistors for MRAM and MFRAM applications.

Studies on selective laser melting of aluminium alloys for rapid prototyping of RF modules: Science and Engineering Research Board (SERB) – Department of Science and Technology (DST), Government of India.