Russian Invasion or Liberation? Perspectives on the Ukrainian Crisis and the War of Narratives 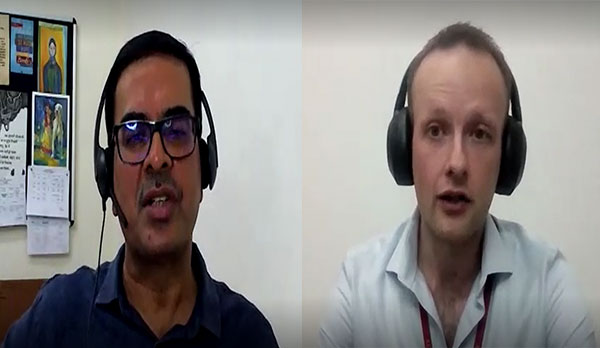 For over one hour, the two speakers openly reviewed the regional, international, and global implications of Russia-NATO dangerous escalation into a potential nuclear confrontation and frankly exchanged views on the causes and consequences of the most important military intervention on the European continent since the end of the Second World War. During the half last hour, the two guests replied to the questions of the viewers under the direction of Dr. Anirudh Sridhar, Alliance School of Liberal Arts’ associate dean, and provided an authentic outlook in a civilizational, cultural, and philosophical perspective on the hottest geopolitical issue of early 2022.

In compliance with the multidisciplinary approach characteristic of the holistic foundations of humanities, which is more than ever necessary to understand the multidimensional aspects of contemporary hybrid warfare, meeting attendants discussed the roots of the Russia-Ukraine crisis and debated the legacy of Kievan Rus’ as the cradle of Russian civilization. They examined the critical impact of the two parliamentary coups that occurred in Kiev, in 2004 and 2014, to overthrow the pro-Russian democratically elected government and establish a pro-US & pro-EU state (discrimination of Russian speakers, prohibition of Russian language, suspension of pro-Russian political parties, etc.) and questioned the multiple aspects of the Donbass war (NATO expansion to the East, process of Eastern Ukraine’s decommunization, growing religious tensions within orthodox Christianity since 2018 Moscow-Constantinople schism, etc.). Speakers also analysed the broader significance of the clash of narratives in the context of Russia-NATO ideological competition, given that radicalization and polarization play a prominent role in the construction and deconstruction of public opinion on both sides of the belligerents. Finally, scholars investigated the further implications of the conflict (energy & security issues in Eurasia, de-dollarization drive in emerging economies, rise of a multipolar world order) and scrutinized the long-term repercussions for India of Russia’s strategic pivot to Indo-Pacific area, started in the early 2010’s, that Euro-American sanctions considerably accelerated since 2014.